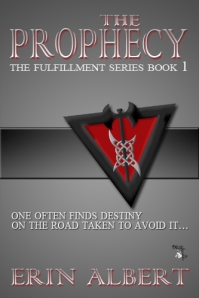 What is The Prophecy about?

Even though she had no chance to escape now, Layla shoved the Elder with all her might. The blow sent him flying into the baker’s door, which splintered under the force, and she darted forward.  The Vanguard soldiers moved to block her.

“We are all Vanguards,” she pleaded. “Please let me go.”

For a moment, they hesitated.  Layla used the opening to slip around them.  She ran as fast as her legs would carry her, but they proved to be too slow.  Within moments, the soldiers leapt upon her, knocking her to the ground.  Wrenching Layla up by her hair, they dragged her back to the Elder, whose face now bled from his encounter with the baker’s door.

“I see you’re going to be trouble.” He brushed the dirt off his robes.  “You can’t escape your destiny, girl.”

Growing up on a small farm in the kingdom of Vanguard, seventeen-year-old Layla Givens lives a deceptively tranquil existence. But her carefully constructed life quickly falls apart when she’s abducted by a religious zealot who proclaims her The Fulfillment of an ancient peace prophecy and whisks her away to marry her greatest enemy.

Wilhelm, Prince of the Ethereals, is reluctant to meet his new bride. He’s grown up believing Vanguards are evil, an enemy to fight and fear…not love. Can he set aside his prejudices and work alongside Layla to bring lasting peace after centuries of war?

Nash, a loner who has never fit in, carries a huge secret, one big enough to destroy both kingdoms. When he accidently meets Layla, he’s no longer content to live in the shadows, but he must resist his growing attraction—for her safety and for the longevity of the two kingdoms.

When Nash’s secret is revealed, a firestorm sweeps through both realms, with Layla at the center. Now she must choose between duty and desire while the fate of two nations hangs in the balance.

Erin Albert is an author and fitness trainer.  Since she picked up Morris the Moose Goes to School at age four, she has been infatuated with the written word.  She went on to work as a grammar and writing tutor in college and is still teased by her family and friends for being a member of the “Grammar Police.”  In her free time, Erin enjoys acting, running, kickboxing, and, of course, reading and writing.

The Prophecy on Goodreads