Enjoy getting to know, Jason Beem: 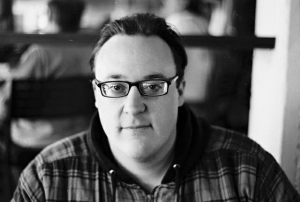 Your book, “Southbound” is set to release on 3/31/2014. Share a passage (a paragraph or less) that you’d like for us to see before the rest of the world.

This is a sentence from the first chapter with the main character Ryan McGuire talking about his love of horse racing.

You’ve been presented with the opportunity to be a best-selling author but can never write again, or write forever, but never have a bestseller. Which scenario sounds more tempting?

To be honest, I’d probably take the best seller and never write again.  Writing isn’t my occupation and I love my career as a horse racing announcer and hope to keep doing that forever.  So I suppose I’d rather have some success with one book and just have that be one little part of my life.

If you could live on a college campus and never leave, or in a small town but be able to travel, which one would you choose?

I’d rather live in the small town whether I could travel or not.  I’ve always lived in cities and while I love having the city close, I like quiet more.  I’m so old now (33) and I go to bed at like ten.  If I lived on the college campus, I’d be the old crabby guy screaming at all the kids to keep it down!

Okay, how about in an amusement park or an airport?

I’d probably live in the airport, especially the one here in Portland.  It has great food options (Elephants Deli!) and a Powell’s book store!  And free wifi.  I mean, it sounds better than where I live now!

And how about Ireland or Brazil?

I’d go with Brazil.  I’ve always been fascinated with South American culture and food and think it would be great.

Not just my favorite 90’s band, but my favorite ever band is Alice in Chains.  They were so dark and brutal and melodic I connected with them instantly.  They were a huge reason I picked up a guitar and started writing my own music.  Other 90’s faves are Pearl Jam, Counting Crows, Blind Melon and Tool.

Is there any good band out there today that we’ll talk about in 50 years?

And what about your favorite comedy on TV (My favorite is The Office)?

My favorite of all time is Larry Sanders Show that was on HBO.  It was a mocking of late night talk shows and is just so smart and so funny.  Seinfeld, The Office and Coach are probably next three.

I actually just started working on a new writing project.  It’s set in the world of hockey which is a sport I really enjoy.  It’s more of a father/son book than anything else.  But I literally just started it last week, so not much to report.

I’ve actually met my favorite author and have asked him questions!  In fact he supplied a blurb to my book!  His name is Willy Vlautin and he writes great novels about everyday folks who are struggling in their lives.  I once asked him “why do you write about people who are having such a tough time and seem to be such everyday characters?”  He said “Because to be honest, I find them the most interesting and the most relatable.”

The Daily Show or The Colbert Report?  Colbert!

Happy or sad ending to a novel?  Happy

Flying or driving?  Driving for sure

You’re stranded on a desert island and you can take two things with you as well as two people. What and who are you bringing?

I’d bring my mom and my great friend, Amanda.  Amanda is a doctor so she can take care of us and my mom is the coolest, so she’d be fun to hang out with!  I’d bring my laptop and my acoustic guitar.

You’re able to sit down with any leader in world history. Who would you choose, what would you talk about, and would you rather have him over to your house, or meet at their place of royalty?

I’ve always been fascinated with World War 2.  I think I’d want to talk to Franklin Roosevelt at the White House and get his opinions on so many things as I think he was one of the most influential figures in our country’s history.  I’d also want to know his thinking when Pearl Harbor hit and when he found out what exactly Hitler was doing.

You can wish for one thing and one thing only, not world peace and no more wishes. What’s it gonna be? 🙂

Health for my family and friends.

I’m excited to show you the cover reveal for “Southbound,” by Jason Beem. Jason is an up-and-coming writer from Portland, Oregon. His novel is set to release on March 31, 2014 from Pandamoon Publishing.