Enjoy getting to know, M.G. Schoombee: 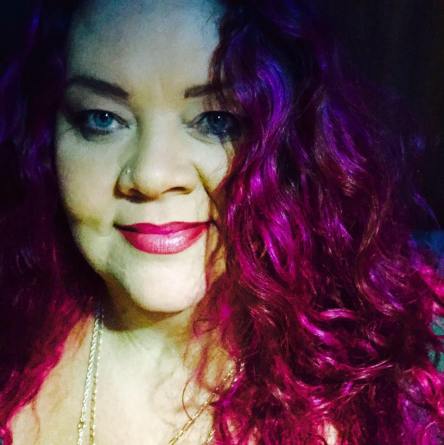 The final book in your series, Arach, was released in June 2017. Share a passage that you’d like for us to enjoy.

“You dance your life into being. It is your dance.”

He sighed as the markings flew from the walls, tattooing her arms and body.

“Why use her again?” he demanded from the wolf. A crow flew into the cave cawing.

“I am the mother,” she cried in labour.

“But you were human, Durril knows.”

“I was once, I wanted to experience the ecstasy of being human. Then I became who I am, again.”

The wolf struggled in pain, as an ancient being stepped out, electrifying the cave.

“She is the mother, I am the father. She births the new life” the man spoke. His long beard smooth and gray. His eyes flashed blue. His hand rested on the wolfs’ head. The crow settled on his shoulder.

The piper stumbled on the rough rocks, terrified of this wise powerful being. “But why, I thought it was over. I thought they now had a thousand years of peace.”

“A thousand years fly by in the wink of an eye” the god smiled sadly. “Tá sé in am,” he cried to the skies.

“It is time!” she breathed.

You’ve been presented with the opportunity to be a best-selling author, but can never write again, or write forever, but never have a bestseller. Which scenario sounds more tempting?

I would rather write forever, living in a tiny house in the middle of the woods.

If you could live on a college campus and never leave, or live in a small town but be able to travel, which one would you choose?

Small town and travel, my bucket list is a few pages long.

Okay, how about in an amusement park or in an airport?

Neither, not fond of people 🙂

And how about Ireland or Germany?

Ireland, The Arach series is set in Ireland.

So many to choose from, I will have to go with Guns and Roses.

Are there any good bands out there today that we’ll talk about in 50 years?

Perhaps some of the rock bands like Radiohead and The Foo Fighters.

And what about your favorite comedy on TV (My favorite is still The Office)?

Again many to choose from, but I love the Big Bang Theory and more recent shows, Unbreakable Kimmy Schmidt.

I am working on a spin-off series of short stories of the Arach books, concentrating on the dragon worlds.

JRR Tolkien. Show me the way to Middle Earth. 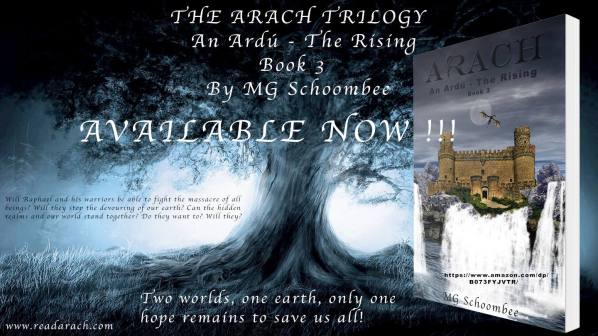 Happy or sad ending to a novel? Happy

You’re stranded on a desert island, and you can take two things with you, as well as two people. What and who are you bringing?

A notepad with pencil and sunscreen. My dog and a survivalist friend. He will keep us alive while I sit in the sun and write.

You’re able to sit down with any leader in world history. Who would you choose, what would you talk about, and would you rather have him/her over to your house, or meet at their place of royalty?

Nelson Mandela, on the verandah of my house, listening to the birds chirping away, I would ask him to teach me to be as forgiving and accepting as he was.

You can wish for one thing and one thing only (not world peace and no more wishes). What’s it gonna be?

May everybody have enough.

I live in a tiny quiet suburb in beautiful sunny South Africa, with my amazingly supportive family, and our extended furry family consisting of five doggies, four special feral cats and all their friends from the neighborhood. Our house is surrounded by trees and filled with birds. I Love music, archery, reading and of course writing. Fantasy and music are my interests and the trilogy of ARACH, combining the two, has been floating through my heart and mind for years. It has been an amazing journey writing ARACH and it felt like it wrote itself at times. I live in a world filled with the wonder of everyday happenings and I dance among them searching for all the magical blessings bestowed on me.

Connect with her below: 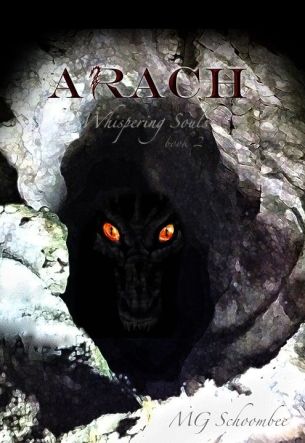