Some people say I talk too much but they’re the one’s saying all that shit. I don’t talk near as much as Wes. He’s always going on about his fucking job and how he hates his co-workers (not to mention that he’s a racist). I’ll give him credit though, he’s an equal opportunity racist. He calls black guys “brother,” anyone who’s Hispanic “Mexican,” and Iraqi’s “Obama.” Not “Osama” but “Obama.” He likes to mix racial slurs even when they don’t really make sense.  But that’s okay, I know how to get under his skin. All I have to do is call him “Fidel” because he kind of looks like a young Fidel Castro when he grows his beard out and wears that ridiculous green, military-style hat.

I’m pretty sure his mom slept with a Middle-Eastern guy somewhere along the way, maybe even two. He thinks that every Middle-Eastern guy is an, “al-Qaeda loving, cock-sucking, plane-crashing son of a bitch.” It’s funny though, he never makes fun of the women. I think he wants to bang the women but when I tease him about it he says, “Fuck you man, I’m not into that shit.” No mention of their more-than-normal body hair. No comments about the hoods on their heads. No talk of terrorism or how Obama is their God. Yeah, I’m pretty sure Wes loves him some dark women.

I don’t have a problem with any other race. You can be Chinese, Japanese, or any other “nese” and it’s fine with me. One of my best friends is Black. I think the girl from Deal or No Deal, number 25 with the afro, is absolutely gorgeous. I like diversity. It’s Wes who is the racist. I remember one time he was talking to this girl, back when we were in high school, and I’ll never forget the look on his stupid face.

“Yeah, my family is really religious,” said Sarah. “My dad makes us go to church all the time.”

“How did you become a Catholic?” said Wes, laughing with a powerful smile that would have made Martin Luther pound his hammer even harder. “Are you guys Mexican or something?”

Sarah was a beautiful girl. She had long, dark hair and deep brown eyes. Her teeth were white and her smile was as bright as a nearly full moon. Now, I’m not a racist but I could tell by her arms that she was probably Hispanic or Latina or from Spain or something. She kind of looked like she had some Spanish blood in her. She had thick, luscious eyebrows and was only 5’ 1.” I watched her as Wes laughed like the inbred racist he is. I actually thought she was going to cry.

“I’m from here you asshole,” Sarah said, touching her forehead with one hand and getting her backpack on with the other. “My parents were born in Venezuela. They came here before I was born. So yes, I guess I’m Mexican.”

You should have seen his dumb-ass face. At first, I wasn’t sure if he was more embarrassed for having insulted the beautiful Sarah or if he was sick because he had hit on a Mexican girl. “Uh, I’m sorry, I didn’t know,” Wes said as he tried to collect himself and get out of there as soon as he possibly could. “It’s just, you don’t look Mexican…”

“I’m not Mexican you jerk. I’m American and my parents are Venezuelan.”

“But you said you were Mexican,” Wes tried to respond but just as he finished the word “Mexican,” Sarah slapped him so hard that he let out a little cry. There was a handprint across his left cheek and he walked as fast as he could out of the cafeteria while everyone turned and looked, as quiet as if they had just witnessed a car accident. Fidel Castro left the room and Sarah sat back down in her seat, composing herself and fixing her hair a bit. I sat across the table from her, unsure of what to do next. I had all these different thoughts running through my mind of what to say and that maybe this was my chance to make a move on the pretty girl.

“I don’t think you look Mexican,” I said, immediately regretting opening my mouth. “I mean, you don’t look like, well, I mean you look norm… You look like you.” Goddammit. I should have left with Wes. Now, she’s going to think I’m a racist too.

“It’s okay,” Sarah said, “I know what you mean. I just hate it when people think I’m Mexican and I’m not. If I were Mexican, I wouldn’t care. I’d be proud of who I was. You know what I’m saying?” Damn, she’s smart too. All I could think of now was saying the right thing. I just had to be better than Wes, that couldn’t be too difficult. I smiled just a sly little smirk and said, “I understand. I always tease Wes because he kind of looks like Fidel Castro and he hates it. I wouldn’t want people thinking I was Mexican or something when I’m not.” There are times in my life where I wished I could take back something I’d said or had another chance to make a better decision. At that moment, I felt like I’d just said something to upset the pretty girl. Wes was the one who had a problem with the Blacks and the Indians and of course the Mexicans. I like everybody, I mean, Sarah looked Mexican and I thought she was gorgeous.

Sarah stared at me with her flowing eyes and didn’t say a word. It almost felt like that moment your mom is upset at you and she doesn’t have to say anything, she just looks at you and you know. God she was gorgeous. She slowly stood up, didn’t say a word, and glancing at me with a bit of compassion, she walked out through the doors and left the cafeteria. I sat at the table, by myself, looking at the people talking and laughing. I’m sure they were laughing at Wes and talking about him getting slapped by a girl. They were probably talking about his hat that made him look like “Fidel.” I stood up and turned around, thinking about what I should do next. I walked out of the cafeteria and down the hallway, towards Sarah’s locker. I saw her down the hall putting something into her locker and looking into her bag. I walked down towards her and stopped just in front of where she stood.

“Hey,” I said, clever as usual, “I’m sorry if I said anything to offend you. It’s just that I like you and didn’t want to say the wrong thing. I’m really not a racist- really, I swear.” She looked at me and just as sweet as could be she said, “Thank you, but I don’t date White guys.”

I saw the grey clouds roll in and felt the soft breeze blow through my hair. Winter often made for cold days and the smell of pine needles was all around. My town of Adairsville, Georgia is nestled right in between Chattanooga, Tennessee and Atlanta, Georgia. December remains my favorite month to go for a run through Redtop Mountain down south in the town of Kennesaw. I parked in the nearly vacant lot and stretched a bit so I wouldn’t cramp up in the middle of the slippery trail. Pine straw and pine needles were notorious for covering the trails as well as deer droppings and a wide array of sticks.

I started my run at a nine-minute mile pace and reached my target of a seven-and-a-half-minute mile pace within the first five minutes. Sweat beads were beginning to roll down my face and my Georgia Bulldogs beanie was already drenched. I could hear the screams of a young child or maybe even a woman up ahead so I sped up my pace to a heavy sprint. I reached the point where the screams were coming from and stopped at the edge where the trail met the woods.

“Hey, are you okay down there?” I said as I tried to peer through the thick trees.

I heard a loud rustling noise and the sound of two voices talking back and forth. I began to fear that maybe a girl was being attacked and that her attacker was trying to keep her quiet.

“Is everyone all right? I heard a scream.”

I waited for a few seconds but still, no answer, only a faint rustling of leaves and branches. I reached down and picked up a branch that resembled a baseball bat and made my way down the sloped hill and to the first tree. I saw a naked man lying on top of a naked woman and knew that something wasn’t right. 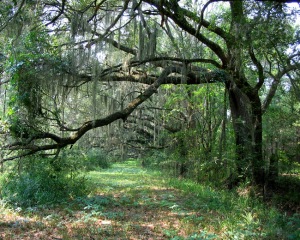 “Hey! Get off her you sick prick!”

I rushed into the woods and hit the young man in the head with the branch. He tried to say something but with one swift blow, he hit the ground and a small pool of blood streamed into the dirt from the side of his head.

“What the hell is wrong with you?” said the young girl who couldn’t have been more than twenty years old. She rushed over to her attacker and kneeled down over him. She didn’t try to cover herself but instead shook the young man to wake him up.

“Johnny? Johnny, are you okay? Johnny, please answer me.”

“Ma’am, are you okay? I’m calling the police, help should be here shortly.”

“No, I’m not okay. You just hit my boyfriend in the head with a fucking log you asshole.”

“I’m sorry, I thought you were being attacked. I called out but no one answered.”

“We didn’t answer because we didn’t want you to see us back here you dumb shit.”

I wasn’t sure what to do as I didn’t know how to explain this to the police. I hung up the phone before anyone answered and looked down at my hefty branch. I walked over to the naked girl and with one quick swing, knocked her out cold.