Enjoy getting to know, Mindy Haig.

Share your favorite passage from your book in one paragraph or less.

“He is what the Father made him, Kay.  He is Sammael, the last son of the Glory of God and the only divine Angel ever given a will of his own.  He is the Taker of Souls.  He is temptation.  He is Immortal.  He is my brother.”

Sammael looked up from where he knelt before the descendent of the first son of dirt.  The will of his father come to fruition after so many lifetimes of denial.

Nate inclined his head to him.  Then he turned and he walked out of that place whole with Kay in his arms.

You’ve been presented with the opportunity to be a best-selling author but can never write again or write forever but never have a bestseller. Which scenario sounds more tempting?

Well, I write because it keeps my brain active.  I enjoy doing the research and the whole creative process.  I guess if I had to chose I would continue to write.

If you could live on a college campus and never leave or in a small town but be able to travel, which one would you choose?

That’s a hard choice.  If it was an actual town with a coffee shop, a diner, a grocery store, etc… and I could travel anywhere in the world, I would definitely choose that.  But I am a city slicker!  I like walking places.  I don’t like driving. I know I don’t have what it takes to live out in the rural country setting.  So if I have to drive 12 miles to the grocery store, that is a big no for me.

Okay, how about in an amusement park or an airport?

Airport.  I am a talker.  I talk to everyone.  And my one real talent in life is I am great at remembering names.  I can find someone I know everywhere!   Amusement park rides make me queasy, though I could probably live in Disney World for quite a while, especially if I could be one of the princesses!

And how about Australia or Scotland?

Probably Australia, but I haven’t been to either place so it’s hard to say!

I would say Pearl Jam.  Ten was the best album ever!  I like a huge variety of music, though.  I was a DJ in college, so there really is not much I won’t listen to.

Their new stuff is pretty good too 🙂

Is there any good band out there today that we’ll talk about in 50 years?

Hmm.  Maybe Muse, they have a good sound and they are creative in their use of technology.

And what about your favorite comedy on TV (My favorite is The Office)?

I don’t watch much television.  I would say my favorite comedy is The Big Bang Theory.

I currently have six works in progress!  Two are sequels: The White Room is the sequel to The Wishing Place,  Forsaken is the sequel to Glory.  One is a YA novel called Undead 101, one is a thriller and the other two are more paranormal romance, which is what I write most frequently.

Douglas Adams was my favorite author of all time!

Christopher Moore is my favorite author who is still writing.  If I could ask him anything,

Ocean or mountains? Mountains (I am allergic to the ocean.  Weird, right?)

The Daily Show or The Colbert Report? Neither

Happy or sad ending to a novel? Happy, always happy, but I am willing to take the long road to get to happy!

Hemingway or Twain? Poe.  Sorry, they just aren’t my style.

You’re able to sit down with any leader in world history. Who would you choose, what would you talk about, and would you rather have him over to your house or meet at their place of royalty?

Well, right now my answer would be King Charles II of England. I am writing a flash back to his reign into Forsaken, leading up to the Great Fire of London in 1666 so I would love to be at the palace at Whitehall and experience the court.  I would ask him about his affairs and his many illegitimate children.  I would ask him about the posthumous decapitation of Oliver Cromwell.  He’s a very interesting character, there are many things I would like to ask!

You can wish for one thing and one thing only, not world peace and no more wishes. What’s it gonna be? 🙂

Ok, this probably will seem off the wall, but if I could have one wish Round Rock, TX would have a Natatorium!  As the mom of 2 competitive swimmers, and a great lover of the sport, it has been my mission to try to make this happen!  I have said a number of times (and not even necessarily as a joke!) that if I could sell a million copies of my books, I would build it!  So there you have it.  I need to have a huge best seller so that the South Texas region of USA Swimming can have a Natatorium in Round Rock!  Swimming fans,Water Polo fans, Divers, pop right over to Amazon and buy my books!

(Or I could hit the lotto.  We’d still get the Natatorium and the odds are probably similar!)

I am a graduate of Rutgers University in New Brunswick, New Jersey. I was born and raised in New Jersey so I am very much a city slicker. I moved to Florida to marry my sweetheart after college and marveled at how little there was to do and how much one had to drive to do it! But due to a job change and an abrupt move, we settled in Austin Texas where the mottos is ‘Keep Austin Weird’ and I try my best to uphold it!

I am the mother of 2 great kids and though writing has always been a pursuit I was interested in, being a Mommy got in the way for quite a few years. I decided I would give it a fair shake in 2009 and I haven’t been able to quit since.  I have a hard time stopping my ideas and when a seemingly great idea hits me – typically just as I am attempting to fall asleep – I am compelled to start an outline.

My 2 great talents are:

1. My remarkable ablilty to remember names – which has served me well.

2. My ability to remember lyrics from every song I ever heard in the 70’s and 80’s – which has not helped me in the slightest.

I have a quirky sense of humor and sometimes TV commercials crack me up.

I like the notion of things being ‘meant to be’ or somehow touched by the unexplainable, so that tends to be a theme in my writing. I also like the effect music has on one’s state of mind and the memories a song can recall. 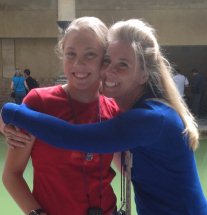 The photo is me with my lovely daughter, Delaney taken in August at the Roman Baths, Bath, England.  Delaney is an aspiring graphic artist! and she has done the cover art for The Messenger, Glory, Cybilla and Forsaken (coming in 2104)